A downloadable game for Windows

Warning: This Game is Not Safe for Work.

An adventure game in the style of an early 90's Sierra adventure with a lewd twist! Alys is trapped in Bizarro World. Help her escape or she shall be trapped forever as the unwilling sex slave of Ignatius Cat, the Phantom Feline Foe.

I am called BeardFacePixelHead, and I've wanted to create games since I was a kid. Problem is, I've never had the drive to actually put the work in, and despite a failed attempt at going to art school to attain a Bachelors of Science in Game Design, decades have passed without anything ever getting finished.

The dream lives on though, and I thought a game jam might be the kick in the pants needed to actually finish something.

I started this project with one goal in mind, finish a game at any cost, no matter how terrible. Well, I feel the results are pretty bad, but maybe you'll disagree. I met my goal though. I created a game. I finished it. It's here. It's real. I'm a game designer, just not a very good one.

This game should take you about 15 minutes to play to completion, maybe longer if you struggle with some of the puzzles. None of them are very hard, so keep at it. Just try everything on everything if you hit a wall, in the classic Sierra adventure style.

Thank you so much for spending your precious time trying my first actually completed project. If this goes well, maybe I'll keep at it, and you'll see more out of me. Thanks again, and enjoy.

Disabled debug mode. (Oops. lol.). Added a title screen with New, Load, and Quit options so you don't have to suffer through the intro just to load a game. Changed the color of something as an homage to the engine I used.

Unzip anywhere and run Alys.exe. winsetup.exe will let you change a few options. Not much in the way of system requirements. This thing would probably run on a potato.

great game, simple yet fun and has a unique charm to it, I just wish it was long and there was more.

Well, it's actually really good, i like it, well by this thime you probably work on other projects but hey, you finally made it, congrats mate, and well, thx for the game, it was a nice time!

its style has more charm to it than the usual visual novels, not quite an rpg but not quite visual novel, pretty fun and i think i havent seen gameplay like this in yrs much better for both reasons in my opinion :D

The content of this is really great, but the gameplay is kinda not the best.

Alys wont see to move past the plant rip me.

First off, I love the game, very nostalgic and very fun to play. Second, could anyone recommend similar lewd games that play like this?

That is the Windows version, but the new version of AGS supports export to Linux and Mac natively, so I might recompile it for those platforms later.

Ohhh, what I meant is it doesn't work in the Itchio client as of yet? Is that coming?

Oh. I'll look into that. There might be an issue with the game having two executables. (One to run the game, and one to configure.)

Ok, it should work now. Turns out I forgot to tag it as a Windows game when I uploaded the updated version.

This is an awesome first game, and one of the better lewdjam games in my oppinion. The amount of work you spent in a jam game is really admirable. Brings up nostalgic memories for sure :) You might want to make it clear that Alys isn't as young as Alice in Wonderland, since you're borrowing so heavily from it, and the situations are certainly not sutiable for a twelve year old or whatever age she is in the books ^^

Okay, now for the reason of my comment. I have the skunk plant, I have dirty panties. There's ominious eyes that hurt me, the frog wants nothing to do with me and I can't use my bare hands, and Alys refuses to use the water to clean. For the life of me I can't figure out what to do. Any hints? 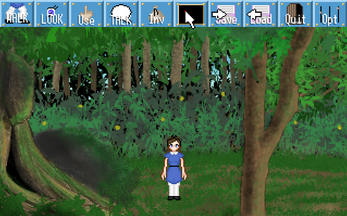 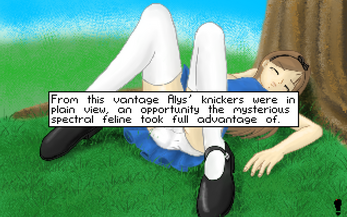 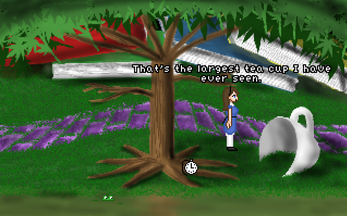